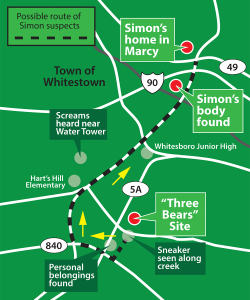 To imagine the horror Kim went through the last night of her life is inconceivable. Below are the facts we know from her final hours, and a map to show the location of events. We hope that what we know will some day lead us to what we don’t know, and solve her mystery.

If anyone has additional information about that night please contact either Retired investigator: Jim Helmer (jim.r.helmer@gmail.com) or Current investigator: Dave Matrulli (dmatrulli@ocgov.net, 315-864-1655).